Gianna Dior and her stepbrother Tony are on a trip, but there’s an emergency at the hotel. There’s a hostage situation that prompts Gianna to call her mom in a panic. When Gianna is distracted, Tony pulls his dick out and strokes it to hardness. After his stepsis gets off the phone, Tony takes that opportunity to suggest that Gianna shows him her tits so he can see them before they maybe die. Once he lays eyes on Gianna’s jugs, Tony begs to touch them. Now that they’ve gotten started, Tony manages to coax his sister into letting him feel her pussy. He puts his hand down her panties. When Gianna strips down to just her shoes, Tony can easily feel her slippery wetness and hear her moans as he fondles her clit. Knowing how turned on she is makes it easy for him to convince her that she should pull his hardon out and start sucking him off. From there, getting Gianna to climb onto his fuck stick and start riding isn’t difficult at all.Once Gianna gets a taste of her stepbrother’s fuck stick she’s eager to have more. She rides him forward and backwards until she’s reached the first peak of satisfaction, then rolls onto her back so he can do some of the work. After a doggy style fuck, it’s just a matter of resuming her blowjob before Tony gives her a face full of jizz. As they’re coming down from their mutual orgasmic highs, Gianna’s mom calls back to say that she saw on the news that the danger has passed. 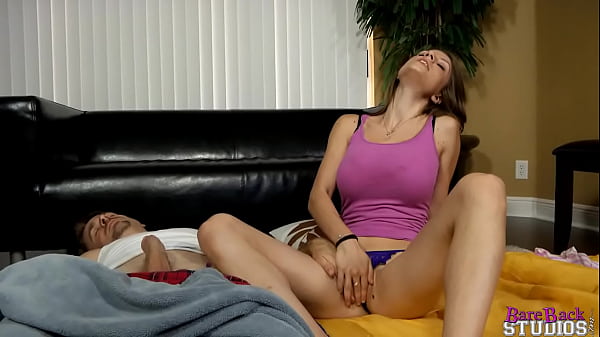